Attention all UTCTF players, asper is in great danger, and he needs YOUR help to reverse engineer this binary and figure out the password. To do this, he needs IDA Pro and a couple of breakpoints. To help him, all he needs is your credit card number, the three numbers on the back, and the expiration month and date. But you gotta be quick so that asper can secure the flag, and achieve the epic victory R O Y A L.

Note: the flag is the password with utflag{} wrapped around it.

Also, this binary was compiled a little differently, and you may need to install some extra dependencies to run it. (Or you can try solving this with just static analysis.) Try installing libc++abi-dev and libcxxtools-dev to run this challenge.

If that doesn’t work for you, try to preload this libc file with LD_PRELOAD.

After opening the given binary in GHIDRA, we can obtain the pseudocode above in main. It looks rather straightforward, with the program doing the following

From this, we can speculate that stuff does something to our input, before memcmp is used to check it. So, the obvious plan is to extract stuff after it is manipulated, and reverse whatever is being done in it.

We can achieve that by setting a breakpoint right before memcmp is called, since at that point stuff would have contained the correct opcodes. Let’s do that in GDB. But hmm, nothing happens when I run the binary, and the process just exited.

There could have been some anti-debug measures in place. When trying to search for references to ptrace() in the binary, I found this in csu_init().

csu_init is called before main

This is a standard way to prevent GDB to attach to the process and debug it, since every process is only allowed to have one tracer.

No big deal, we can just patch the call instruction to a nop instead. (There is currently an issue with GHIDRA when trying to patch binaries after auto-detecting its format. Check this issue.)

Now with our patched binary, we can attach GDB to break before memcmp is called and dump the contents of stuff. From the loop in the pseudocode above, we know that stuff contains 0xcb bytes. Dumping memory in GDB is very simple.

After that, we can open stuff in GHIDRA. 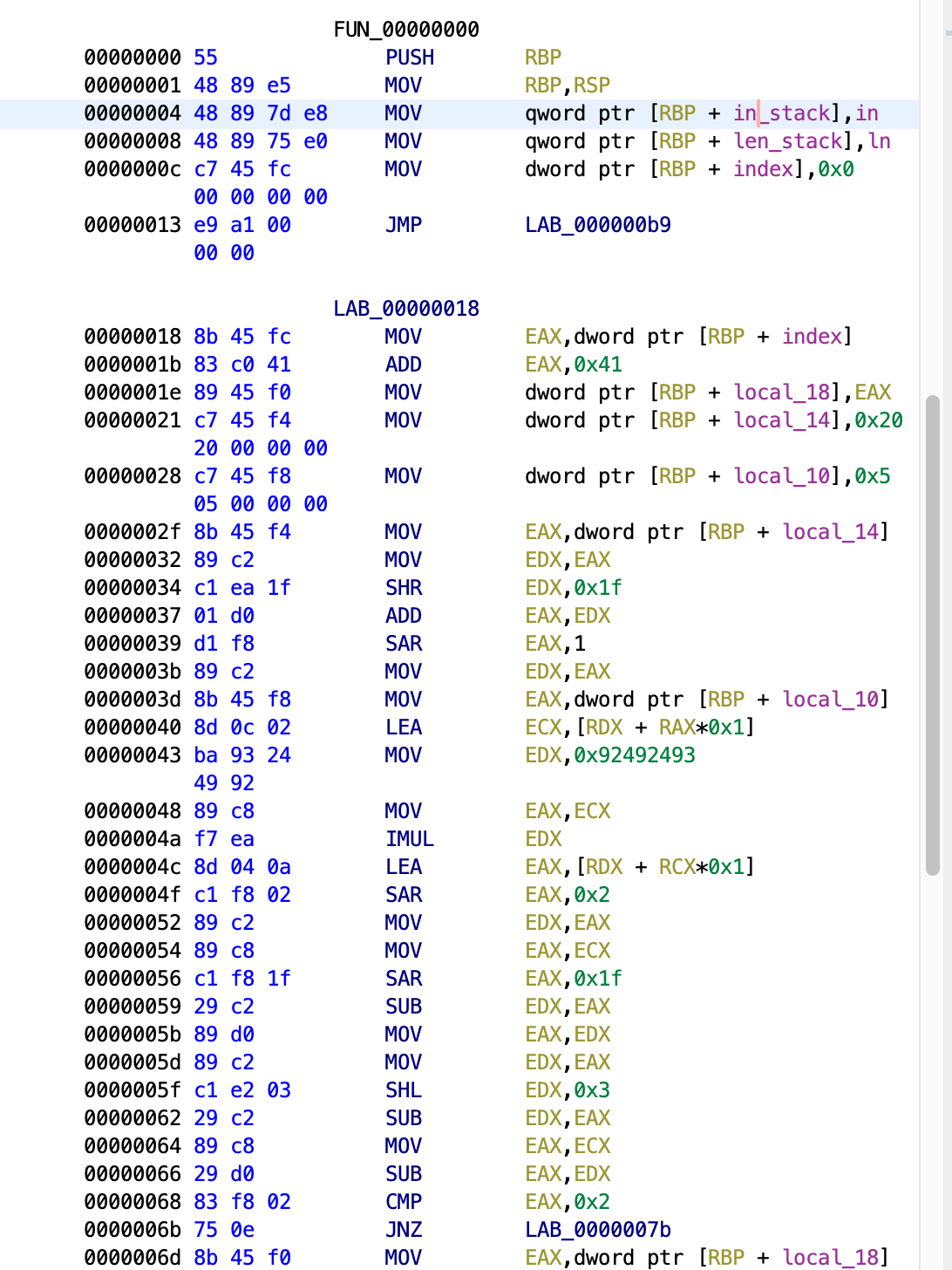 So many instructions… How about looking at the pseudocode.

The next logical step is to apply the reverse of this function to test, which is compared with our input after being modified by this function. I wrote a simple C program that would take in test as input and print out after decrypting it.

With this in place, we need to also dump the contents of test so that we can decrypt it.

Before submitting the flag, I entered it into the given binary for a sanity check. But it tells me this is wrong?

Recall the divide(0x20, 0) enclosed in a try/catch block. Apparently in the catch block there are some manipulations being done to our input as well, which GHIDRA did not show in the pseudocode.

Since dividing anything by 0 would cause an exception, the code inside the catch block will be executed. Perhaps this was a way to hide the code. But anyways, it wasn’t very complicated, just 2 additional lines.

Adding this to our decryption code, we get the correct flag.