We are given a file challenge.hex, which is in the Intel HEX format. objcopy can be used to convert it to binary format.

The service reads in an input and gives an output that suggests it is parsing the input.

To execute the program locally, an Arduino emulator is needed, and I used simavr which is really good. I cloned the repository and ran make in the root directory of it. I did this instead of apt install simavr because I also wanted to build the simduino binary under examples/board_simduino.

With these installed, we can emulate and debug the program with a few terminals open

Arduino boards have an ATmega microcontroller chip, which runs an AVR processor core. AVR has a RISC architecture and is based on the Harvard architecture. What this means is the program and data memory lie in different memory units/spaces.

This is different from the von Neumann architecture which has the program and data lying in the same memory space, as seen on x86 machines. This is important to note because it affects the way AVR instructions work, which will be elaborated more later. 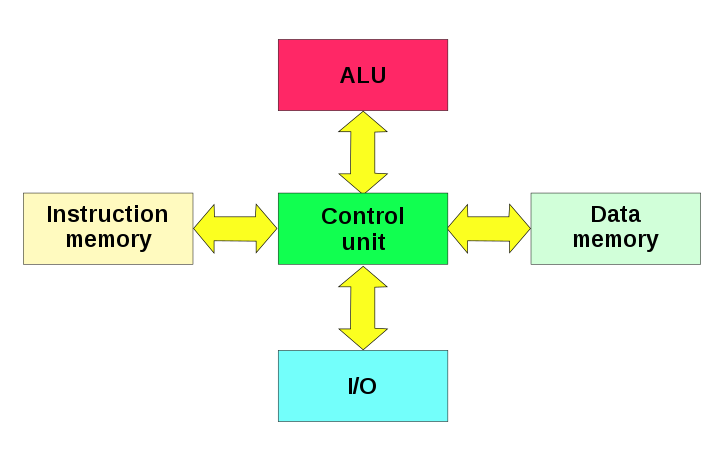 According to the Arduino documentation, there are three pools of memory in the microcontroller:

Flash memory and EEPROM memory are non-volatile (the information persists after the power is turned off). SRAM is volatile and will be lost when the power is cycled.

The best resource for the AVR instruction set is the AVR Instruction Set Manual itself. It contains everything we need to know, and everything is easily accessible through the table of contents. 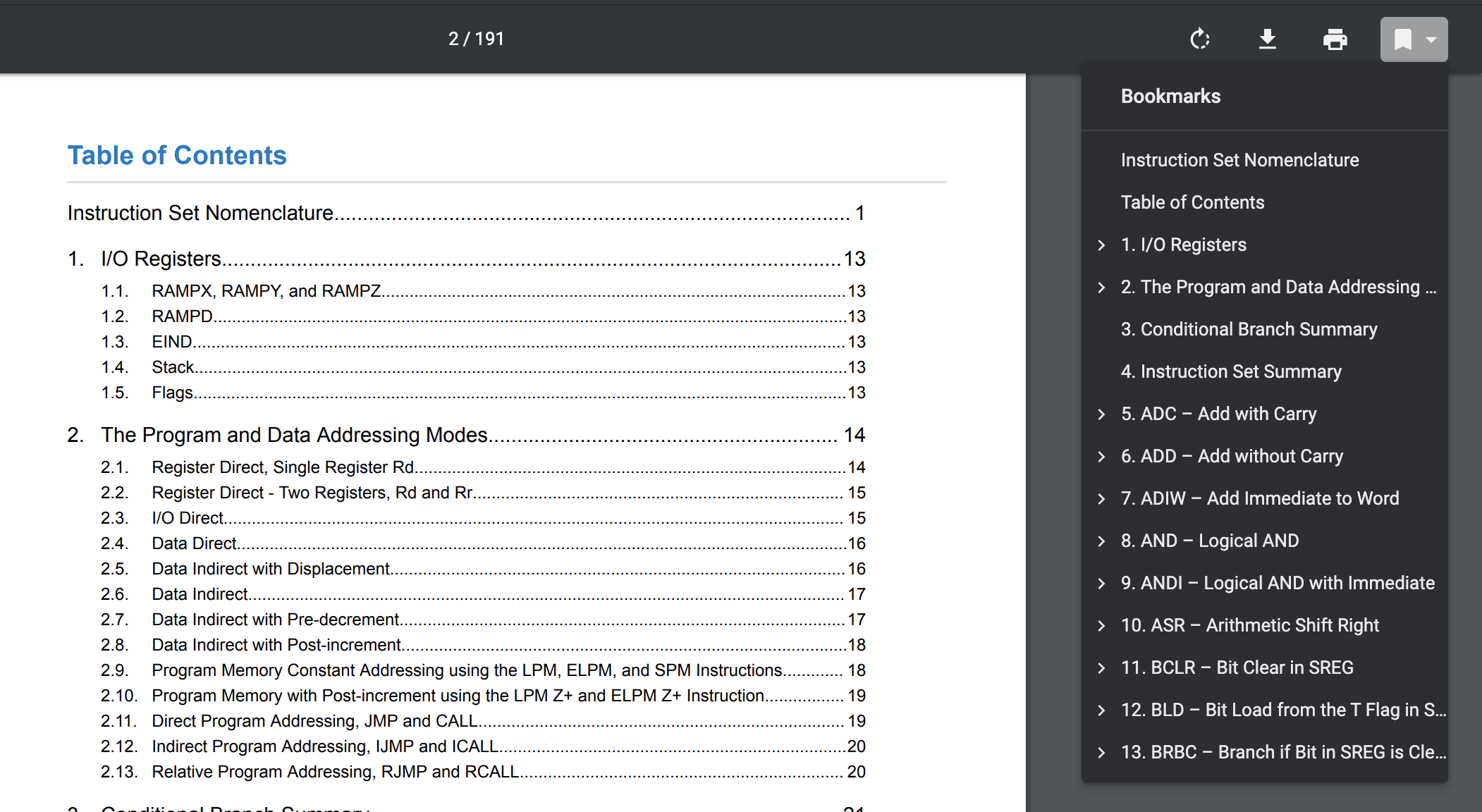 Later, when opening the binary in Ghidra, we can also see a register W, I’m not sure where they got this name from, because I cannot find any information about it online. Anyways W is just the concatenation of registers R24:R23.

First look at Z, which is normally used in loading program memory. Recall as mentioned earlier there are 2 separate memory spaces, the program space and data space. So, the instruction to load from program memory is completely different from the one to load from data memory.

For example, suppose program:030 contains the 16-bit value ABCDDBCACAFEBEEF. To load the value ABCDDBCA we need to set Z = 0x60 and for CAFEBEEF we need Z = 0x61. 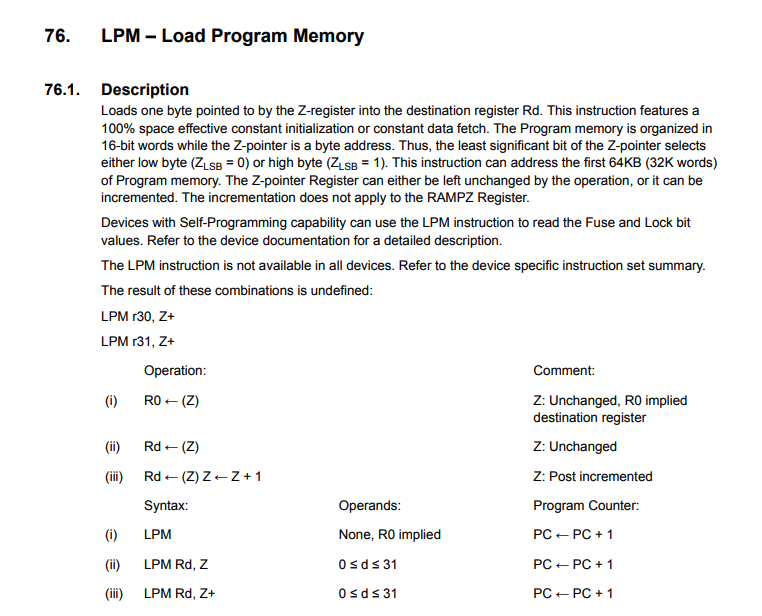 Only the Z register is used to load from program memory.

For loading from data memory, it is less troublesome. The address pointed by the X/Y/Z register directly maps to the address read from the data memory space, like what we would normally expect.

The following are snippets from the manual for the LD (Load Indirect from Data Space to Register) instruction.

Referring to the instruction set manual

Like any other instruction set, there are a few types of addressing modes.

But the ones that I don’t think exist in x86 are the pre-decrement and post-increment modes. As the name suggests, the X/Y/Z register can be decremented before or incremented after loading from data memory.

This is used quite often so it is worth taking note of. The manual also describes each addressing mode very clearly.

Knowing these, the rest are pretty much the same as what we would see in other instruction sets such as x86 or ARM, consisting of arithmetic, branch, compare, and store/load operations.

The ATmega microcontroller is not just a CPU. It also has other things like I/O pins (to interact with the outside world), EEPROM (read only memory), etc. To interact with these devices, we need to read/write from/to a special set of status/control/data registers. Although they are called registers by name, they are actually not physical registers like R0-R31, but are located in the data memory space.

To analyse the program, I opened the binary in Ghidra. There were a couple of options to choose from, but after trying them out, I found that the ATmega256 option works well, with all the MCU registers at the right location in memory. I believe the board used by the challenge service is an ATmega328p instead. There is no big difference between them from a reverse engineering perspective, just that the 256 one has more MCU registers that the 328p, which we can just ignore.

The start of the binary contains the IVT(interrupt vector table), which contains instructions when each interrupt is triggered. The RESET interupt, as its name suggests, is the one that will go to start of the program, like main in x86 binaries.

As mentioned earlier, the ATmega256 has a lot more MCU registers (hence more interrupts) than the ATmega328p, so the code for RESET overlaps with some of those non-existing entries in the IVT. So some manual work to clean up is needed.

Some things to take note before reverse engineering the program:

Here’s a simplified version of main, or better named setup.

USART stands for Universal Synchronous/Asynchronous Receiver/Transmitter, which is the protocol used by the Arduino to perform serial communication.

As we can see in the following code, the program reads and writes to UCSR0B, UCSR0C, and other MCU registers. USCR stands for USART Control and Status Register, hence it is used to control the USART operations on the Arduino. To understand the purpose of each write, we need to refer to the datasheet.

(There is an n in the datasheet because there can be more than 1 USART interface on the board.)

To summarize, this function

After USART is enabled, the program can either read from or write to the USART I/O Data Register (UDRn) to receive or send data through the serial port. The transmit and receive operations share this buffer, so in order for this to work properly, there is an underlying mechanism using some other registers or interrupts to let the program know when this register is available. Anyways not something to worry too much about here.

Since earlier UCSR0B was set to enable USART, I know that n=0, so I tried to search for references to UDR0, so that I can first identify the print and read functions in this program, just like what I would first do with any x86 program. But somehow I could not find any reference to any UDR at all, really not sure why.

At the start, the program copied some data from the program space to the data space, and this data contained some strings such as "> " or "Parse error, got this far:". I tried to search for references to the addresses that would contain these strings but also could not find any.

For both cases, I can’t tell if I got the addresses wrong or they were intentionally/unintentionally obfuscated.

After this, the program enters a function that calls a series of functions to interact with the user through the serial port.

Hoping to get an idea of what each function does, I wanted to set a breakpoint after every one of them is called.

At this point, I have not tried setting breakpoints in GDB to inspect the program yet, but just clicking into functions to see if I can find anything interesting.

However, setting breakpoints for AVR in GDB doesn’t seem to be that straightforward. Suppose I want to break at address 0x321, I cannot just do break *0x321 as it will “help” me add an offset to the address, treating it as a pointer to the data space, but I want it to point to the program space. Still no idea what is the correct syntax to do this, but I found a workaround.

Somehow if I add an offset to the program counter ($pc), it works properly. So I just assigned $a to the $pc at the start, then offset it to the address I want. Also, I needed to multiply the offset by 2 because memory in the program space is 16 bits wide.

Quickly, I was able to name the functions.

I decided to look more into read_input, since that is the most important part, to know what I need to enter. With more inspection, I found a function that looks like it is parsing the input.

It seems that in parse, different inputs result in different numbers returned, which is exactly what a parser does. The characters also look familiar as they can be used to form different types of values (number, string, dictionary, list) in most programming languages. Therefore, the type for each number can be summarized as follows.

With this knowledge, read_input can be rewritten as the following.

Clearly, to store such type of values, there must be a certain data structure used by the program. I decided to skip this first and proceed to look at get_output, as there must be something related to the flag in there.

Flag is stored in EEPROM

Inside get_output there are a bunch of things going on, that I could not understand because I have not reversed the data structure yet. However, I saw a function that seems to be reading data from the EEPROM. Well, I’m guessing it must have something to do with the flag.

The read_eeprom function is quite straightforward. It polls until the EEPROM device is ready, writes the address to be read from into EEAR (EEPROM Address Register), then reads from EEDR (EEPROM Data Register).

Looking at the checks done in get_output, I just guessed that the numbers could be the type of value that is sent as input. This can be easily verified by setting breakpoints after the comparisons, and I found out that the input must be in the form {1337: "something here"}, in order to reach the code that reads from the EEPROM.

With the input above, I was able to get the program to print an output that seems to change based on the string I provided. Upon more testing, I realized it compares my string with the data in the EEPROM character by character, until there is a mismatch, then it prints the value difference between my wrong character and the correct character.

A simple script can be used to get the data stored in the EEPROM.

By the time I solved this I had 5 minutes left :p, so I didn’t try the subsequent challenges avr-pwn and avr-own. But knowledge of the data structure used by the program was definitely necessary to solve those parts. There’s a writeup by hgarrereyn who solved all three parts of the challenge 👏🏻👏🏻.

Some link dumps to videos by LiveOverflow: